How We Met SLAYER

When life offers you a chance to meet Slayer, do not duck it, even if you have no idea what you'd say to such legends. Instead, hop in a car and head and down to the venue, where after a half hour of negotiating with security, you'll end up backstage and be able to see for yourself. Such was what happened to us, the National Day of Slayer Task Force, thanks to Slayer's management. 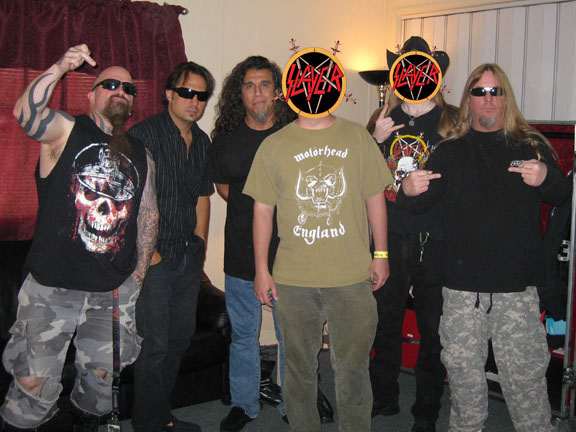 We met Slayer in Albuquerque, New Mexico, which if you haven't visited is a tidy little city where people seem to be polite and keep to themselves. Home of the University of New Mexico, Albuquerque has one gigantic venue which could fit the Mayhem fest, on which Slayer were co-headlining. In the hills just above the town, the venue is an amphitheatre with a wide green belt for people to watch the stages below.

After getting patted down by security, who were remarkably gentle with some of the intoxicated patrons, we went in to the venue. A droning staccato pattern informed us that Cannibal Corpse were playing on the second stage. We set up shop by the VIP area and waited for someone to lead us to Slayer. As if in surreal tribute to Slayer, in one of the natural landscape dividers a snake emerged, and slithered fitfully in a futile attempt to escape the pounding bass.

It was hard to contain excitement. This is Slayer -- the band that guided many of us through our final years of high school, gave us things to shout at the top of our lungs when excited, and provided endless hours of learning to shred alone with the tablature for "Hell Awaits." Were they even real? The question seemed ludicrous, but it was entirely possible in our minds that they were indeed mythological figures -- hopefully not hungry for sacrificial blood.

When Jim, Slayer's tour manager, led us back into an office near the dressing rooms, we had to do a pulse check. Nervous? Indeed. I would have been less nervous meeting the President of the United States. Dressing rooms, as you may know, are all-purpose artist containment areas so they don't have to face the madness of the crowds or press without intervention. Slayer's seemed to be several rooms, one of which was a lounge.

As we staggered in behind Jim, we saw Dave Lombardo, comfortable on a couch, immediately. Then Tom Araya hovered into view. Kerry King had been still on a second couch, as if he had mastered invisibility. As we shook hands, another person appeared in the room. This was Jeff Hanneman. About the only thought I could muster was, "Holy crap, they ARE real!" 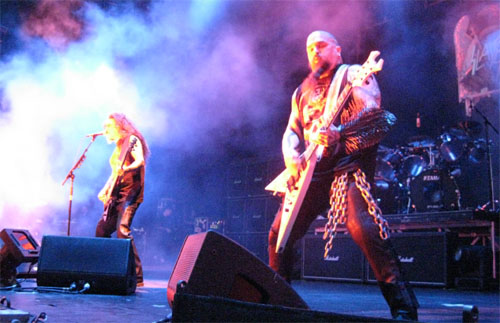 The Slayer guys are gentlemen. Known misanthrope King was tolerant of us; Hanneman was affable; Araya cordial; Lombardo, bemused. I got the impression of very forceful personalities, the kind of people who walk into a situation and immediately know what it lacks, and then devote themselves without stop to making it happen.

We had no idea of the etiquette of the situation, so took a photograph, thanked them for the music, and left. It took a long time for the adrenaline to fade. As you can tell from the photo, they exist and indeed walk among us, and we're thankful to the Slayer team and Slayer themselves for allowing us to discover this.

As our adrenaline slowly wound down, we found ourselves floating through the backstage area, which was a crowd of musicians and roadies, and then back out to see the show. Here Slayer showed supremacy over their art form by taking the stage without much ado, announcing themselves through the gravely voice of Tom Araya, and launching into their music with fervor.

Opening with "Darkness of Christ" and "Disciple" from God Hates Us All, the band tore into a raging rendition of "Jihad" from Christ Illusion between an uptempo version of "War Ensemble" and a faithful "Born of Fire," both from Seasons in the Abyss. They capped this off with their new single, "Psychopathy Red." 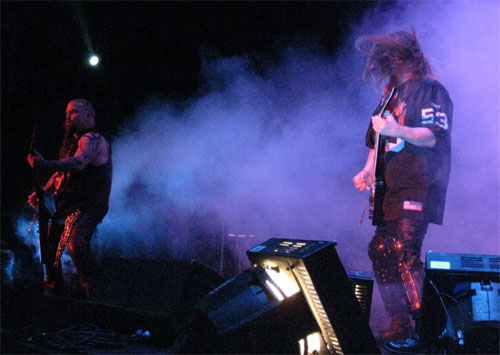 From that point on, however, their set consisted solely of the classics they created. "Mandatory Suicide", "Chemical Warfare" and "Ghosts of War" came so quickly they were essentially a medley, and after a slower break for "Dead Skin Mask," the enduringly cool "Hell Awaits" preceded the tryptych of their most well-known songs, "Angel of Death," "South of Heaven" and "Raining Blood."

Throughout the entire set Slayer kept the energy level high, their playing precise and crisply accurate, while looking every bit as enthusiastic about this material as when they wrote it. Correspondingly, the crowd went wild for the whole set but came alive like a fire for the classics. When Slayer left the stage to make way for Marilyn Manson, most of the audience stood up, shook hands and headed for the gates. I don't know what happened to the snake.

A Slayer concert is never a bad thing; they've never had a bad one. But getting to meet Slayer really made our day. It was even worth the police harassment on the drive back (during a drug stop in which they found nothing more incriminating than a picture of us with Slayer, haha). If Slayer comes to your town, make it a local day of Slayer and take the day off to hear some good music. Albuquerque did and we all had a blast.